A new tool designed to improve the performance of your ads

Written by Wade Wilson
Updated over a week ago

Optimizer is an in-house technology that blacklists underperforming traffic sources and adjusts bids according to your set rules.

How to set up rules?

2. Click on the New Optimizer button to create your first Optimizer.

3. Give it a meaningful name.

4. Create your first GROUP OF RULES by naming your group and choosing what it is you want to potentially block: browser, carrier, country, creative, device, language, OS, site, or spot.

By default, the time interval for the “BLOCK” action is set to last 30 days. In other words, as time goes on, the Optimizer gathers available data for the last 30 days, including today. There are other available time intervals if they better fit your goals. 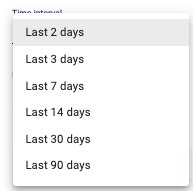 Combine different rules for better results and add as many of them as you need.

Note: Each rule in a group is applied on an AND basis. Hence, the Optimizer will block a source only if all rules are applied at the same time.

In the above example, we have created a group of rules to block the spot if it reaches 10,000 impressions and if the CTR is below 0.01%.

In the second group of rules, we choose the rules that block a spot if more than $10 is spent and the number of leads (conversions) is less than 1.

Add as many Groups of rules as you want, then press SAVE.

The created Optimizer will appear in the tab Optimizers, where you can edit it anytime.

5. Go to the Settings page of any of your active campaigns or Create a new one. Regardless of your choice, you will find the tab Optimizers there. Finally, link your campaign to the Optimizer.

6. Save your campaign and enjoy the results!

What is Auto-bidding optimization?

This is a feature in the Optimizer that allows you to automatically change the bid. You can set up a rule by which the spot bid will be adjusted (increased or decreased).

How to use it in practice?
Let’s say your target eCPA is $2 and your average conversion window is less than 2 days. If the eCPA on an ad spot is less than $2, the campaign will get more traffic by raising the bid. On the contrary, the price for spots with high eCPA or no conversions should be decreased.

To make the optimization strategy applicable for all ad formats and traffic sources, the maximum and minimum bids are set to the allowed maximum and minimum, respectively. Notably, the bid changes by percentage rather than by precise number.

Here are the group rules created to automate your bidding process on the TrafficStars platform:

If you want to create a complex optimization strategy within a single Optimizer, you can also add the rules for blocking non-converting spots. If the ad spot spent more than 5x of my target eCPA and did not convert, the Optimizer will block this traffic source.

💡 We recommend that you set the same time interval and frequency of bid changes. However, you can test different options that will maximize your profits!

🔰 Time interval – the past period, based on which the Optimizer analyzes the statistics.

🔰 Frequency – is the rule check frequency. That is, how often the Optimizer will check and apply the rules.

You can track the performance of the Optimizer in the History Log tab. Here you can find detailed information about campaigns linked with the rules, events that triggered the rules, etc.

💡 It could take up to 20 min for Optimizer to gather the necessary data. Hence, delayed action on the spot may be expected.

💡 If you delete an Optimizer from one specific campaign, its rules will still apply to other campaigns where you have the same Optimizer.

💡 If you delete an Optimizer from Optimizer Tab, then it will be deleted from all campaigns where it was active. All changes made by Optimizer before its deletion will remain in the campaign.

💡 If you have selected the Audience Prime, then Optimizer will not block sites, as you can not add sites to the black list in the campaign with this audience type

💡 The Optimizer needs about 10 minutes to stop traffic. This occurs after all conditions of the rules are met and with changes to all rotators.

Create your own rules and get the most out of ad campaigns!